Tweet A simple safety razor like the one pictured at left (via Amazon) can teach us much about marketing. We forget that those of us in the Western world (and increasingly those of us anywhere) live our lives enmeshed in marketing. Virtually every object in our homes has made it there because of some kind of promotion, [...]
Tweet 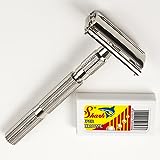 A simple safety razor like the one pictured at left (via Amazon) can teach us much about marketing.

We forget that those of us in the Western world (and increasingly those of us anywhere) live our lives enmeshed in marketing. Virtually every object in our homes has made it there because of some kind of promotion, whether that was educational or just “spin.” And few things in our lives have been more carefully marketed than shavers.

In Free: The Future of a Radical Price (affiliate link), Chris Anderson talks about King Gillette, who popularized the safety razor and spawned countless imitators in the arena of creating a core product–the shaver–with a complementary good–the razors–that a consumer had to purchase again and again. It was genius, one of the original and still best branding efforts of all time. “Razors and blades” has become a standard business shorthand for such a model, a testament to its power and longevity.

All to the well and good, but not why I’m thinking about the safety razor today. Allow me to give you a bit of background. It involves my personal grooming habits, but I hope you’ll see why it’s applicable in a moment.

So, here’s my routine: For years, I have shaved in the shower using disposable cartridges. It has always worked fairly well. I don’t look too scruffy, and I’ve always thought the blades were of a higher quality than regular disposables, in addition to being better for the environment. Over the years, I’ve ridden the wave of ever-increasing numbers of blades in these cartridges. The double blade was obviously better, right? So why wouldn’t three and then four and now even five be better too? And there were always various strips of stuff on the blade, special blade materials, pivots, hinges…. Sure, I never turned into a fighter pilot like the guy in the commercials, but I figured I was getting a pretty good shave.

Something happened to disrupt this, though. The shaver handle I was using was coated with a kind of plastic which had started to…degrade in the water. It had turned into a sticky mush that was grossing me out. And I thought, “Why do I have to buy another one of these pieces of junk? I’ll just get a metal handle.” Well, it’s not that easy. Long story short, it’s not very convenient to buy a non-disposable handle for disposable cartridges. But the investigation got me to reading about safety razors, which are still made (basically, it’s a thin sheet of metal with razor edges on the two long sides that drops into the holder). “Archaic,” I thought. “A good way to injure myself.” But as I read, I found report after report of people who were perfectly satisfied with them, indeed preferred them. When I found a nice chrome one like the one pictured above on Amazon with 100 blades (about a two-year supply by my rough calculations) for less than $40 (less than half what two years of cartridges would cost, better for the environment, and even cheaper over time), I figured, Why not?

So here I stand a month of use later. No new scars or major lacerations. No identifiable difference in the quality of my shaving. Feeling like a grown-up. Enjoying getting to use that little disposal chute in the medicine cabinet. And wondering why the heck we’re all using razors with multiple blades.

We should remind ourselves that innovation comes in many forms. Most of what passes for “innovation” is really new ways of marketing things. The person who came up with the idea of two blades was a genius, because everyone knows “two is better than one.” Saturday Night Live did a parody in 1975 in which–hah hah–a razor with three blades was released. (It could never get that dumb, right?)

I don’t feel as if razor companies owe me any money back or anything. Until now, I was never anything less than happy with what I was getting, and I doubt in the early ’70s that they knew for sure that two blades weren’t really better than one. Still…we can all think of cases where the marketers involved were obviously trying to sell us a bunch of extra blades on our razors (at a higher price, no less). The Coen brothers parodied it brilliantly in Fargo as Jerry tries to push an undercoating on his potential car buyers, who have already agreed to a price without it:

I sat right here and said I didn’t want no TruCoat!

Yah, but I’m sayin’, that TruCoat, you don’t get it and you get oxidization problems. It’ll cost you a heck of lot more’n five hunnert –

The customer ends up paying an extra $400 for the TruCoat (it’s $100 off the supposed asking price) and leaves furious. “TruCoat” sounds like a wonderful high-tech product, but customers know rustproofing can be a scam (or perhaps that cars should be rust-proof to begin with).

Apple as a company is brilliant at taking things that already exist and making them feel shiny and new. Lots of people believe that Apple had the first touchscreen smartphone and the first graphic user interface. Apple makes incremental improvements to existing technologies, packages them fashionably, and then markets the living heck out of them (far more than, say, Microsoft). When’s the last time you turned on broadcast television and didn’t see an Apple commercial of some time? Why is that? It’s because it takes a lot of work to remind you that the product is new, magical, exciting, revolutionary. Etc. Ironically with Apple, the songs aren’t the razor blades–the songs are the razor handles. You have to keep buying a new Apple product to listen to what you already have.

This isn’t an anti-Apple rant, though. All companies do this to some extent. In a crowded field, you can differentiate yourself in one of only a few ways–on price, on features, on quality, or on mystique. Think Nike. Are the shoes better? Sure they are. Because someone thinks they are. Things are whatever they’re perceived to be.

So what’s the moral of this story? Well, I draw a few lessons from it, including:

Ultimately, the question is this: Is anyone justified in selling something that might be but isn’t obviously better? What are your favorite examples? I don’t think it’s a simple answer at all, so I’ll look forward to hearing what you all think. Thanks for reading.